Mal Pais is a small hamlet on the Southern tip of the Nicoya Peninsula which juts out into the Pacific Ocean. Its southern limit borders the Cabo Blanco National Park, from where the community stretches for around 4 km, until Playa Carmen. Here, at the road intersection, begins the sprawling surf town of Santa Teresa.

Mal Pais means “Bad Land” in English and there exist many theories about the origin of that name. Maybe it was called so because of its rocky coastline, or maybe because landslides on its steep and jungle-covered hills are not uncommon.

Although generally not good for swimming, the coastal scenery is picturesque, with small coves, promontories and jagged rocks bashed by the surf. A favorite pastime is bathing in the many tide pools at mid tide and Playa Suecos or Secret Beach is idyllic for snorkeling and swimming!

A particular draw for eco tourists is the neighboring Cabo Blanco National Park. The lushly forested hills of the nature reserve provide the scenic backdrop of views from the beaches. Cabo Blanco is an important refuge for nature and animals which are threatened by the booming development in many parts of the Santa Teresa area. Entering Cabo Blanco is however not allowed from the Malpais side, the park entrance is in Cabuya, a 7 km drive away.

Malpais hosts the only port in the area. It‘s just a narrow channel between rocks to a small spot on the beach where the fishermen keep their boats. Their number has increased significantly years as in high season many fishermen offer boat tours for tourists. The harbor also serves as a take off point for many aquatic activities like kayaking, SUP paddling or boat tours.

For many years the Southern Nicoya Peninsula was off the beaten tourist track because it was difficult to get there. Roads were bad and there were fewer ferries available than today to cross the Gulf of Nicoya. Surfers and adventurous backpackers were the first travelers to discover the beaches with its great surf spots. As roads and public transportations improved Malpais, and Santa Teresa particularly, turned into one of Costa Rica’s most popular tourist destinations.

While in recent years Santa Teresa has become a bustling surf town, Malpais has retained its laid-back vibe and beckons travelers in search of nature and tranquility. Life is slow paced and many properties are on large parcels of land where animals find shelter in the thickets and monkeys traverse through the canopy. 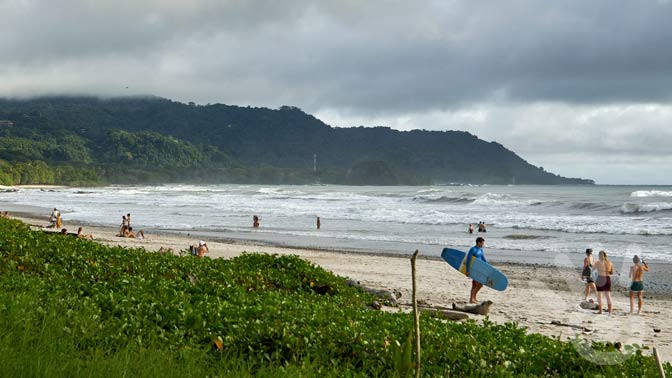 The difference between the two neighborhoods is clearly distinguishable on Playa Carmen. It is like an invisible line that is drawn between the two communities: to the south few people are seen on the rocky coast of Malpais, while to the north people flock to the sandy beaches and surf of Santa Teresa.

The parking lot on the beach of Playa Carmen is one of the most popular beaches of the area with easy going surf and nice beach restaurants. Behind the beach the road intersection of Playa Carmen is the main commercial center of the beach communities where you find banks, the pharmacy and car rentals. Most people arrive at this intersection, coming from the road from Cobano. Veering to the right you drive on the busy and sometimes traffic choked street further down into Santa Teresa, while taking a left you are on a quiet road to Malpais.

The ratio of tourist attention wasn‘t always like this. In former times the whole beach area was rather known as Mal Pais while the name of Santa Teresa was virtually unknown. The first hotels and resort were founded in Malpais at around 1986. Around the turn of millennium however foreign investors started to buy more and more land in Santa Teresa. They promoted the village as a cool surf beach and within a few years it morphed into a mainstream tourist destination. The whole region is now increasingly referred to as Santa Teresa. It has become one of Costa Rica’s hottest spots with development raging on at a dizzying pace. Not only surf bums are attracted, the area is also well known among the hip and famous. A couple of hollywood celebrities have tucked their luxurious oceanview estates in the hillsides which further spurs the development of real estate in Santa Teresa.

Today a young, energetic community offers all kind of services, and you find some of Costa Rica’s finest hotels and a surprisingly vast choice of good restaurants. The younger crowds in particular flock to the happening surf town where bars and hostels have always something going on.

The party scene in Santa Teresa is famous, with beach parties and events in funky bars and hostels or art galleries. The main street is lined with clothing boutiques, surf shops and a great many of bars and restaurants. Compared to that, the number of restaurants and hotels in Malpais is limited and they are spread far apart. It‘s useful to have an own vehicle as there are also no shops or supermarkets in Malpais, only a small grocery store. The closest bus station for Mal Pais of the direct bus from San Jose is on the road intersection of Playa Carmen, while Santa Teresa has multiple bus stops all the way until the northern end of the village.